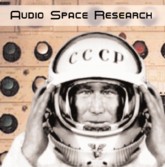 The sole release by the duo Audio Space Research (Eve Thacker of Evematic and Kevin Busby of Carya Amara, Abominations of Yondo etc.) presented synthesiser improvisations (with no overdubbing) in sessions recorded in 1995 and 1997.

The result is a hazardous space experience that will take you on a bumpy ride through unknown systems.

The CDR edition is no longer available.

“Damn fine… ‘Strength Substitute’ whorls, screams, dives and plummets through some awesome sounds… ‘Winsome Wreck’, like the previous track, uses a simple run of notes and as these change slightly, they’re overlayered with all kinds of effects. At times the music reminds me of some obscure, cult horror movie…. ‘Sidereal Sky’ is more Kraftwerk in its use of a structured synth rhythm, but gradually changes and falls away as distant effects rumble and sparkle from the speakers…. Anyone who enjoys the more experimental side of Kraftwerk will find this album rather pleasurable” – Modern-Dance magazine

“Beautiful electronic spacey jams. I have been playing it all weekend, and it gets better with each listen… An excellent CD” – Michael Griffin (USA)

Released on 16th June 2013 as download in a variety of formats on Bandcamp.