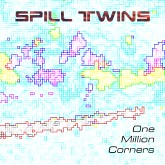 Elliot Smith, the man behind Spill Twins, works as a software developer, specialising in open source applications. His one-man music project reflects this perspective and, although software is used to produce the music, Elliot tries to spend zero money on software and sounds, since he finds that the constraints enforced by a limited set of software helps him to focus on the music.

One Million Corners, the debut release by Spill Twins, presents some of the best tracks recorded over the first decade-and-a-half of the project. Elliot says “I try to make moving music. I start tracks from rhythms, and sometimes with a scenario in mind: very often it involves sad robots on forgotten space stations. That’s who I imagine is listening!”.

Also released on 13th June 2010 as an MP3 download from archive.org.

Released on 15th June 2010 as a download from Bandcamp in a variety of formats.