Abominations of Yondo –
That Remote and Awful Twilight 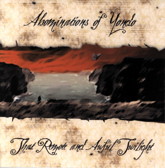 This, the second album by Abominations of Yondo, has among its influences the penultimate chapter of ‘The Time Machine‘ by H.G. Wells. However, the listener is of course free to associate other scenarios, memories or febrile imaginings with the assembled sounds.

The moment of ‘Escape Velocity’ owes a stylistic debt to the work of the master synthesist and producer Isao Tomita, to whom the track is dedicated. The album as a whole is dedicated to all people who feel obliged to space-time.

Abominations of Yondo is a collaborative project of Cousin Silas and Kevin Busby (of Carya Amara).

The other albums by the duo, Abominations of Yondo and Clandestine are also available on Earthrid. 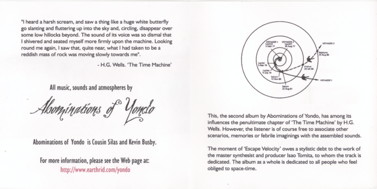