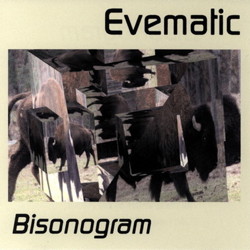 Evematic was a solo project by Eve Thacker, who passed away in January 2013.

Eve’s solo release on Earthrid, Bisonogram, was recorded according to her typical methods, which used a unique combination of exotic analogue and bargain-basement digital audio units, wired together in her home studio. The results are not to be missed for anyone with an ear for unique electronic music that is by turns joyful and suspenseful.

This album was originally released by Earthrid on CD in 2004 and is now made available again as a free download.

“Showing off her experience and knowledge of the genre, Thacker creates texture-beds within texture-beds of intriguing, unique sounds.” – Splendid e-zine

Released on 17th April 2013 as a download in a variety of formats on Bandcamp.