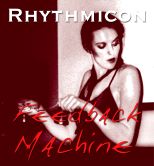 Rhythmicon’s live experiment, Feedback Machine, mixing the sound of the crowd with synthesisers, theremin, and saxophone… A collaboration between Kevin Busby (of Carya Amara, Abominations of Yondo etc.) and multi-instrumentalist Miss Hypnotique.

The organisers of the event had asked performers to accommodate feedback from the audience – and Rhythmicon took the request literally. Noise from the audience was, for once, encouraged: these reactions were electronically processed in real time and fed back into the performance. The 15 minutes of music on this mini-CDR (8 cm in diameter) range from the rhythmic to the spaciously avant-garde.

Free download from Bandcamp The mini-CDR edition is no longer available.

The miniature CDR (8 cm in diameter) was designed to be played in domestic CD players that have a loading tray (most of them have). They should not be used with “slot-loading” CD players, such as those found in car CD players and some computer systems.

“This is something quite unique, at least to these ears. I think what ultimately wins me over is the live element. Particularly the fact that the audience is part of the performance. Human warmth, element of chance, etc… it’s a quite fascinating performance, sensitive and sensible… All in all, this is intriguing music. You can relax to it and let your thoughts and feelings wander” – Jakob Winnberg (Sweden).

“Truly inspired sound sculptures… As with all things musical, some folks really dig the wailing sax, but for me it just annoys. That theremin, though, wow!” – Modern Dance magazine

“The three tracks vary widely, but are held together by their consistent instrumentation…. Part 2 starts with the sound of the audience clapping. This slowly turns into processed effects, out of which the sound of a theremin emerges. This track is the longest, at about six minutes, and is the most satisfying. It has an aggressive, industrial edge to it, but balances that with moments of delicacy” – Synthtopia

Released in November 2015 as a download in a variety of formats on Bandcamp.