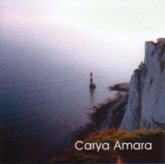 Extinction Frequency is a retrospective of electronic music by Carya Amara from the years 1992 – 1996. It displays a progression from the more rhythmic material on the companion CD of earlier experiments, Tales of the Unattractive.

A fuller sound and increased use of samples helped produce music that was by turns engaging and unsettling.

Extinction Frequency is available as a download from Bandcamp.

(The CDR edition is no longer available).

From the CD Booklet

Most tracks on this retrospective of music from the early and mid 1990s were recorded on an 8-track tape recorder. Tape is a linear medium, which means that a lot of rewinding and fast-forwarding of tape is required when realising even quite minimal electronic music. The last track, 'Das Klang', started life in the same way, but this final version was completed on a random-access, digital audio system. Farewell to tape spools winding back and forth, hello to a new set of obstacles and challenges… As always, interpretation of the music is left to the listener. “You can never explain to people…”

Thanks to Nadja Rosental for guest vocals on ‘Das Klang’.

“Extinction Frequency grabs a firm hold right from the very opening and never once lets go. Raw-edged and positively eviscerating at times, downright hilarious at others, it maintains a ruthless and driving energy – as well as a sparkling clarity of sound… very special indeed” – Stone Gnome

“It has an easy, pop-culture humour with a tendency to taking a left-turn into the darker reaches.” – The Violet Apple

“It is a true joy… I think it goes especially well with blueberry muffins and coffee… I should mention that your packaging is, once again, absolutely beautiful.” – Michael Griffin (USA)

“this album shows that whilst Carya Amara can produce some cutting edge industrial ambience, they can also produce… rhythmic pieces that wouldn’t be too difficult on new ears… Superb” – Modern-Dance magazine.

Released on 3rd June 2013 as a download in a variety of formats on Bandcamp.