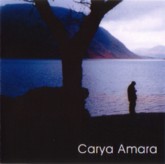 Carya Amara – Tales of the Unattractive

A retrospective of experiments in electronic music from 1980 – 1991 by Carya Amara.

Synthesiser melodies, lo-fi experiments with record players and warped organ drones set the course for Carya Amara’s rejection of musical categories, and paved the way for the music in the companion volume, Extinction Frequency.

Get Tales of the Unattractive

Tales of the Unattractive is available as a download from Bandcamp.

(The CDR edition is no longer available).

“CA’s influences are certainly more evident here… Tales is hellishly varied, and would, to be honest, make a great starting point to test the waters” – Modern-Dance magazine.

Released on 7th June 2013 as a download in a variety of formats on Bandcamp.