"I was expecting something dark… and it is, but it is more…" 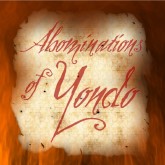 Abominations of Yondo is a collaboration between Cousin Silas (releases on numerous netlabels) and Kevin Busby (of Carya Amara, Audio Space Research etc.). The duo‘s debut album, also called Abominations of Yondo, is a collection of other-worldly music, sounds and atmospheres inspired by the writings of Clark Ashton Smith.

A writer of Weird Tales…

Clark Ashton Smith wrote ornately worded tales of fantasy, mostly during the 1930s. Much of his work was originally published in the influential "pulp" fiction magazine Weird Tales, and he shared some themes and mythologies with his correspondent and fellow teller of weird tales, H. P. Lovecraft (himself the subject of a track on the Cousin Silas album Necropolis Line, released on Earthrid).

Smith’s stories ranged in location from deserts concealing bizarre abominations to distant planets, and in temporal setting from the ancient continent of Hyperborea to Zothique, the last remaining land of a far future age. You can find out more about his work at the excellent Web site called The Eldritch Dark. However, you don’t need to have read Smith’s work to get the best out of the music – as you listen, your own imagination will guide you…

Available as a free MP3 download or from Bandcamp in your choice of format.

"Abominations Of Yondo remains engaging throughout, easily grabbing the listener’s attention and imagination, taking him on a vivid aural journey." – Connexion Bizarre

"I was expecting something dark… and it is, but it is more… much more. I can’t quite describe how much I love this album. It feels right. It’s how ambient music should be: accessible but with depth; immersive and other-worldly. This is a fantastic example of head music – music that conjures up pictures, thoughts, ideas through the nuances of sound… Truly beautiful." – Headphonaught

"A good solid ambient album, with a sense of depth and atmosphere befitting the cosmic menace of the stories that inspired it" – Heathen Harvest

"I loved the weird, ethereal electronics — very bleak, very much in the mood of C. A. Smith’s dying, parched landscapes" – The Violet Apple

Also available by Abominations of Yondo on Earthrid

Also released on 29th October 2007 as an MP3 download from archive.org.

Released in November 2015 as a download in a variety of formats from Bandcamp.