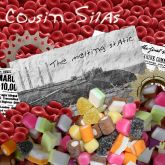 Following the release of Cousin Silas’s album Necropolis Line and his collaborative CD as half of Abominations of Yondo, Earthrid is pleased to bring you this mini-CDR of evocative electronic music, which was originally broadcast by radio show Phantom Circuit.

The limited edition mini-CDR is no longer available, but you can download this complete session free of charge, as an MP3 from the Internet Archive or from Bandcamp in your choice of format.

"I have only one word for this release and that is ‘mesmerising’! This is a set of beautiful & engaging ambience… I was captivated… like a sailor drawn to the sirens. Please check it out." – Headphonaught

Also released on 16th October 2009 as an MP3 download from archive.org.

Released in November 2015 as a download from Bandcamp in a variety of formats.